Good morning everyone and welcome in this “bonus” article I made just to celebrate my 14th birthday in this game.

I wanted to write an article describing the history of eUSA citizens from the beginning of eRepublik. It took me few months to collect all the data and make these graphics, and now I’m also working to make the same with the population of the whole world, but it will take longer. I can already say the trends of eUSA follow the trends of the world, so there will be not much differences in graphics, just in the absolute numbers.

Let’s begin: I signed every eUSA citizen registered in eRepublik from its first day, 20 November 2007, till yesterday, 19 July 2022, day 5355. These are the graphics (click them to see in full screen).

I usually don’t like the logarithmic graphics, but in this one you can really appreciate the days with less than 5 beginners. Sadly it misses the days with zero registrations, so the count of the days is not perfect: it misses almost 30 days, some in beginning of the game and some in 2018.

I put here also the graphic of monthly registrations, then I will explain everything.

eRepublik started on 20 November 2007 and Durbin was the first eUSA citizen:
https://www.erepublik.com/en/citizen/profile/201

In the first day of game there already was the first banned American player:
https://www.erepublik.com/en/citizen/profile/292

An ancient player that sometimes still show up is ScottCoyleSr, from 23 November 2007 :
https://www.erepublik.com/en/citizen/profile/557

The older American citizen still alive, standing on game, is Taiyou, 1 December 2007 (even if I think it’s a bug) :
https://www.erepublik.com/en/citizen/profile/2175

The second half of 2008 counted a mean of 70 eUSA beginners every day, and the few days with less than 10 registrations were the days of game maintenance (in first years eRepublik was used to go offline for many hours during maintenance, even a full day).

From the beginning of 2009 the eUSA (and the game) literally exploded, with a mean of 200 beginners every day till September and even a mean of 350 eUSA new citizens from September 2009 till April 2010. There were also 2 or 3 waves of multiaccounts every month counting more than 200 banned citizens each. In the first graphic you see how close the peaks above 500 are .

The history doesn’t stop: everyone remember the 6 July 2010, when the V2 began. The official name was eRepublik Rising, but, looking at the data, the name “eRepublik Failing” sounds more appropriate: the mean of daily beginners went back to 80 till October 2010, with just one wave of multiaccounts in three months.

On 27 September 2010 the game went to the actual V3 and the eUSA population raised again, some months even higher than before: a mean of 400 eUSA beginners from January 2011 to April 2011, the higher baby boom of the eUSA history.

As fast the population went up, it also went down: 100 daily registrations from May 2011 till the end of the year.

The 2012 was a pretty positive year with a mean of 150 eUSA beginners every day.

From August 2013 the mean went under 50, and even the waves of multiaccounts in the next 4 years didn’t reached 100.

From October 2014 the mean of daily registrations was 20.

From August 2016 the mean of daily registrations was 10.

From June 2017 the mean of daily registrations was 7.

But on 20 November 2018 something new happened : for the first time the “no name citizens” appeared in eUSA (in some other countries they already appeared the previous year).
They are all citizens like this one:
https://www.erepublik.com/en/citizen/profile/9442116
Their name is simply Citizen with his ID number. Before that day they never existed in eUSA and before 2017 they didn’t existed in game. They are all low level, low strength, low rank, no avatar, and most of them join the same unknown Military Unit (Rough Guys for a year, then Free Beer till today). Even if they are few years old now, almost no one has been banned and around 5 % of them are still alive, and it’s a pretty high number, considering the long time they exist.

From 20 November 2018 to February 2019 they registered around 100 citizens every day, but they never stopped to do it: there are few “no name citizens” almost every day till now: this one has registered yesterday:
https://www.erepublik.com/en/citizen/profile/9664046
In the logarithmic graphic you see, before their apparition (days 3700-4000) there were lot of days with 1, 2 or 3 new registrations only, and after them these low days are a lot less.

“No name citizens” sure contribute to increase the daily mean of beginners: from April 2019 till June 2020 it was higher than 10, and still now it’s higher than 5; without them we barely can see more than two real daily new citizens in these last two years. But all these “no name citizens” are just numbers, they do nothing in war and I think not even in economy.

Here is the graphic with the total number of new eUSA registrations per year. Remember that 2007 counted just 42 days and 2022 just 200 days. 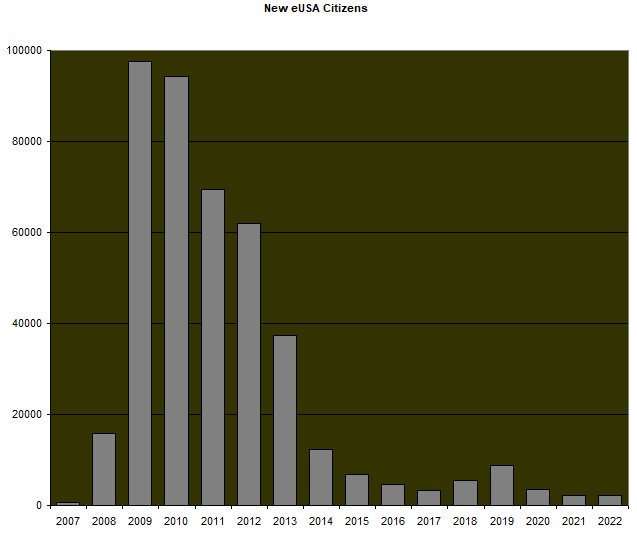 The next graphic is cumulative: it counts every day the total amount of eUSA citizens in game, alive, dead and banned. 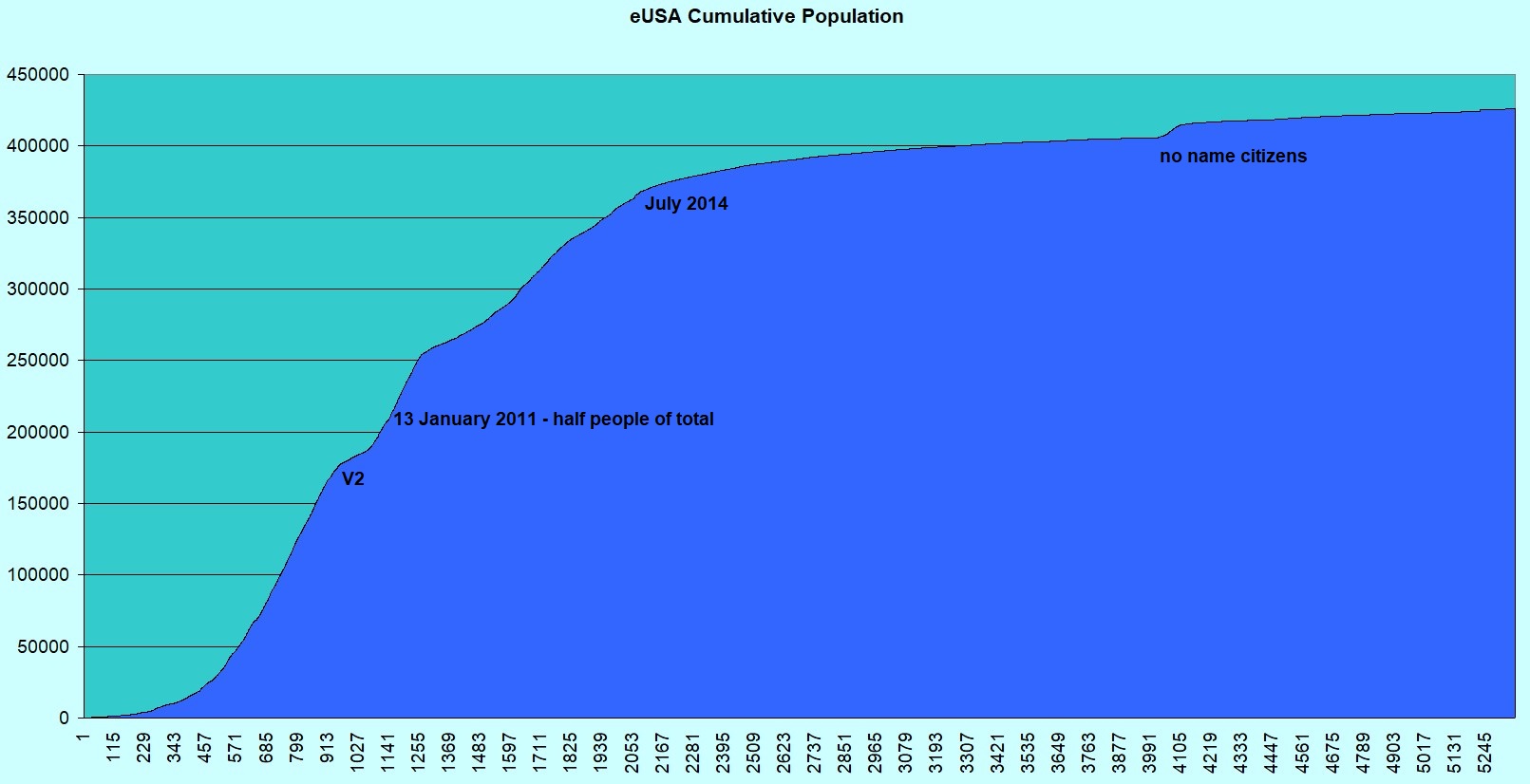 As I said before, you can easily see that the beginning was slow, and the big increase started after the first year of eRepublik. With just a little slowdown during the V2, the citizens increased really fast for more than 4 years, till the inflection point on end of July 2014, around day 2080 of game.

Now I explain my last graphics about the American Milestones. They are related to the cumulative graphic above: it’s just a timeline where I put a vertical line the day when eUSA citizens reached a milestone of 100 players, 1000, 10.000 and 100.000.
In the first graphic I made just the first year of eRepublik timeline, from 20 November 2007 to 20 November 2008. 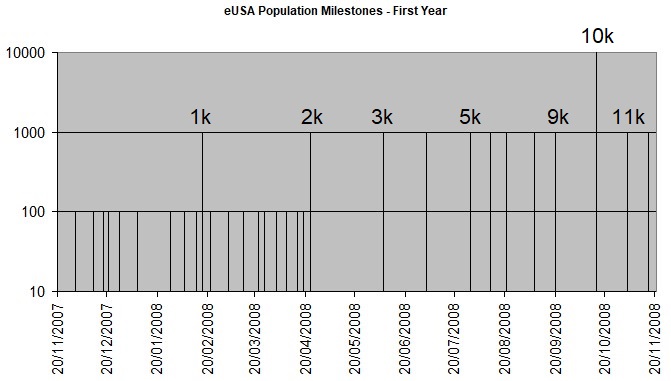 United States took just 10 days to reach 100 players, on 1 December 2007.
About the same time was needed to reach 200 and 300, then in just 3 days eAmericans were 400, on 21 December 2007.
In the same day “dead citizen” status has appeared in some citizens profiles, so I can say the first 400 eUSA players were all alive at that time. It means a lot of people, considering it was just another baby browser game in 2007.

The first dead citizen was probably the person I told he was banned the first day, because the other users have played more than one day.
https://www.erepublik.com/en/citizen/profile/292

Almost two months later, on 17 February 2008, eAmericans were 1000 and the number of newbie’s increased day after day.

Then the thousands of players went fast one after another and the 10.000 milestone has been reached on 15 October 2008.

In the first eRepublik birthday, 20 November 2008, eAmerican registered citizens were 12.273.

Then there is the whole timeline of eRepublik American registrations (click for full screen).

The previous graphic still appears here till the 12k milestone.

After that I put just the 10k milestones because the thousands were really close: 1000 registrations every three days. It means around 10k beginners every month for the next two years.

You can see more distance in the lines just in the three months of V2, between the 170k milestone and the 190k one, but after the third birthday of eRepublik, on 3 December 2010, eAmericans were 200.000.

On 13 January 2011 there were half of the Americans we have today, 213.000. It means in 3 years and 2 months the registered eAmericans has been the same number as the next 11 years and 6 months.

On April 2011 you can see the first big slowdown, after the 250.000 milestone: the registrations dropped from 10k every month to 10k every three months.

In 2014, after the 380k milestone, there is the second big slowdown and the inflexion point. From there the number of registrations has been less and less every month.

After that one, I put again the little 1k milestones, so you can notice the little push of the “no name citizens” to reach the 410.000 registrations, on 4 January 2019.

In the last 2 years, even if the milestones are not so distant as in 2017, they are still distant: just 1000 beginners every four or five months.

The last milestone of 425.000 citizens is on 10 March 2022, the famous day of the last wave of multiaccounts I described in one of my previous articles.

Today, 20 July 2022, the American citizens registered in eRepublik are 425995, and tomorrow or the day after tomorrow we should reach the 426k milestone. Will we ever reach the half million milestone? If eRepublik go on with the trend of the last 2 years, it will happen in the year 2038.

And today, 20 July 2022, I reach my 14th in game birthday. What can I do now? Oh yes! I can finally roam around eRepublik in scooter and steal your girlfriends, so, stay alert! 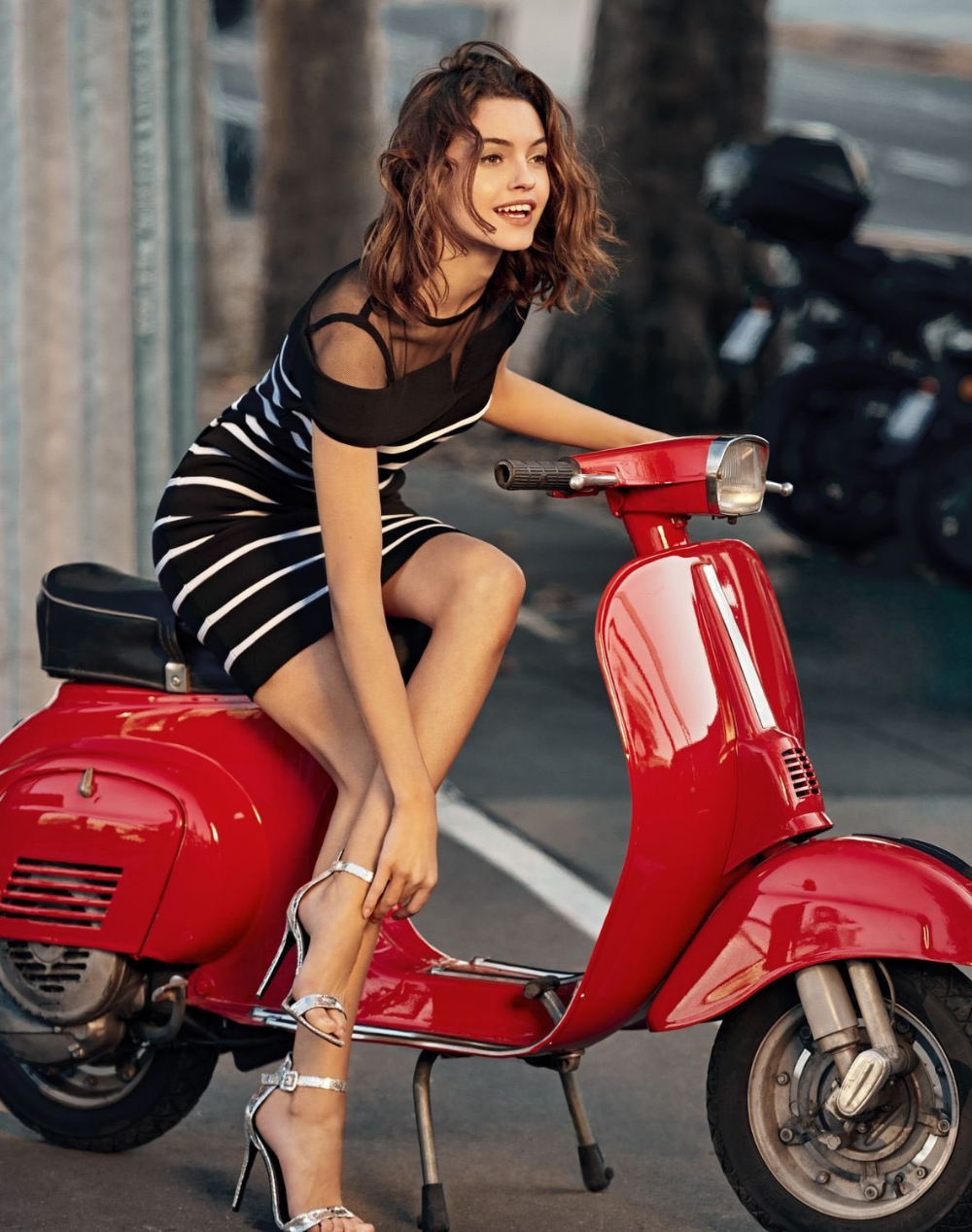 Better take good care of your own girlfriend. 😛

Thank you so much!

Is she so annoying?

You are a legend

Just awesome. Thanks a million.

Nice article and a fascinating look back. It's interesting to look at the numbers in so many different ways.

Happy eBirthday! Always love the articles you put out Mister Y! Always loved the comments you'd leave me, glad you're around.

Thanks for this look - I remember the busy days fondly

Ahahah oh nooo, here another. Do you all have annoying girls around?

Yay thank you, ancient one.

Well damn you’ve got me by 8 days.

Happy Birthday!
This is a master class of an article.

Omg how did you collected the datas ?
Greetings from france

Hey!
Last two years and half I'm collecting demographic data day by day. For the old numbers I use eRepublik Tools.

If I put a dress on What a Guy and put 3 gold in his purse would you take him?

No thanks, but I appreciate the generous offer.

I could say what I think the no names are, but I don't want to get banned XD